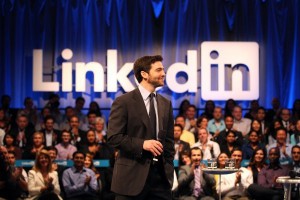 Taking the stage at the Launch Conference in San Francisco today, he gave the audience of start-up entrepreneurs and investors five characteristics that make up a world-class tech product, and gave an example for each one.

1. Great products deliver a singular value proposition. Weiner highlighted Google as a perfect example of this. Before they erupted onto the scene, AltaVista was the most prominent search engine at the time. However, because Google “just focused on their logo and a search box, “they eventually changed the world with their search engine.”  Earlier in the talk, he used Yahoo as an example of what not to do. He said that “each time they went into another vertical, they encountered competition.”

2. They anticipate a customer’s needs. Weiner said that Waze is a perfect example of a product that knows what its customer wants and delivers on it. He told the audience that one day, as he was about to leave work, he turned on Waze and was about to type in his home address when a message popped up asking whether he was going home.  Combining driving directions and mapping  intelligence, Waze had figured out the general time he usually headed home, using this information to anticipate his daily commute time.  This, he said, “sends the signal that the product understands me.”

3. They exceed expectations: Weiner told the audience that one night, he and his wife were hosting a party. He was in charge of music for the night, but because his wi-fi had just been reconfigured, his Sonos music system was not working. He called their customer service line, and was told that because it was a holiday, the offices were closing in 15 minutes. In the end, Weiner said that “the customer service exceeded expectations … the guy stayed an hour after close to help me set up music.” It helps to not only have a great product, but reliable and dedicated customer service, as well. This is important for many Viet Nam software outsourcing and Viet Nam software services to consider.

4. They resonate emotionally. According to Weiner, a perfect example of a product that resonates emotionally is a Tesla — “it’s like driving an iPhone,” he said. He constantly mentioned how using the product felt like “driving the future,” a catchphrase that Tesla has never once marketed. He mentioned how others have said the exact same thing about driving Tesla’s, which really hammered home the point that the best products make you feel without directly prompting you.

5. Have a meaningful impact on your life: Weiner mentioned that his “iPhone has become the control panel of [his] life.” The best products are the ones that manage to change your routines and make you willingly give up at least some control over an aspect of your life.