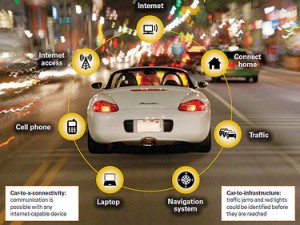 We got a glimpse of the future at CES 2015. From connected cars to fitness tech, here are some of the stars of this year’s show.

Cable is dead and your car is a supercomputer. Well, maybe not quite yet, but if CES 2015 showed us anything, it’s that a future powered by Web television and connected cars is closer than you may think.

I spent the past week walking the massive show floor at the annual Consumer Electronics Show in Las Vegas. And while I encountered everything from robots to butt selfie sticks (yes, seriously), a few key trends emerged as I talked to more people and saw more products.

Don’t take these trends as hard predictions for the future, but as the direction in which consumer tech is heading, as indicated by the products that made the most waves. Without further ado, here are some of the emerging trends from this year’s CES:

1) Technology is killing cable bundles. Brad Reed of Boy Genius Report couldn’t have said it any better: “The cable bundle is rapidly becoming a thing of the past.” One of the biggest launches of CES 2015 was Dish Network’s Sling TV, a $20 a month Web TV service that comes with ESPN, Disney, CNN, Food Network, TBS, Cartoon Network, and other channels. It’s potentially game changing. In addition, almost every new TV shown at CES came integrated with Hulu Plus, Netflix, and other Web TV services in the web application development. TV is far from dead, but cable bundles are destined to die a slow, painful death.

2) Connected is the new catchword. You couldn’t walk five steps on the CES floor without running into a smartwatch, a fitness wearable, or a fridge with an internet connection. I had countless conversations with representatives from startups trying to make connected furniture, cars, toothbrushes, and light bulbs. Thanks to the success of companies like Nest, everyday items are becoming part of the long-discussed Internet of Things. In a few years, nearly everything will be connected. This is a great opportunity for Viet Nam software outsourcing and Vietnam software services.

3) Your next car will be more computer than transportation device. I got to drive around CES in the new BMW i8. One thing that struck me about the car–and every single car at CES–was how much computing power was packed into the driving machine. The i8 comes with its own internet connection; GPS, Spotify, and Pandora integrations; in-depth monitoring of the i8′s mechanical components; and access to everything from Facebook to Wikipedia. This is becoming the standard for many of the new cars coming out of the big manufacturers. The car is becoming the ultimate connected device.

4) Tech has invaded fitness, health, and beauty. CES 2015 was a stronger show than years past, in my opinion. One of the reasons was the massive number of fitness and beauty companies that showcased their wearables and smart tech this year. Panasonic had one of the coolest pieces of tech this year: a smart mirror with a screen that shows you how your makeup and appearance will look in different settings. Interaxon showed off the next generation of its Muse brain-sensing headband, used for attention and emotional training. Fitness, health, and beauty were all at the forefront of this year’s show.

5) Apple is still the king of consumer electronics. When I checked Techmeme during the middle of the week, the top story in tech wasn’t a new smart TV or product launch from Samsung or Nikon–it was leaked news about the new Macbook Air and Apple Watch. In particular, hundreds of wearable companies are watching the Apple Watch launch. There are many opportunity for mobile application development business in the future.