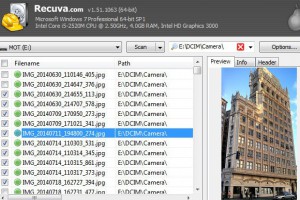 Whether recovering photos is easy, difficult, or impossible depends on a number of factors. One important factor is where the photos are stored. If they’re on a removable card, such as an SD card, you’re in luck. If they’re in your phone’s internal storage, you’ve got a far more serious problem.

Either way, the more you write to that storage, the less likely that you’ll ever see those pictures again. So if they are on a removable card, remove the card now. If they’re in your phone’s internal memory, use the phone as little as possible—just calls and texts. Keep it that way until you either successfully restore your images or give up.

If the photos are on a removable card

Download and install Piriform’s Recuva onto your Windows PC. The free version should do.

You probably already have a way to connect your card to your PC. If not, you can buy an SD card adapter, or a MicroSD adapter, for less than $10.

With the card connected to your PC, load Recuva and scan the card (which appears as a portable drive). Recuva will almost certainly find most of your photos, and on your command, copy them to your PC’s internal drive. 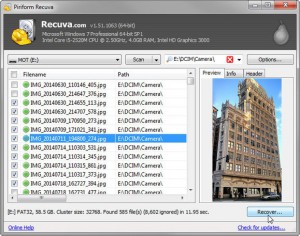 If the photos are in your phone’s internal storage

If your phone is running an outdated version of Android, you can connect your phone to your PC via a MicroUSB cable, and select the USB Mass Storage option on your phone (pull down the notification bar at the top of the screen and tap the USB icon). That effectively turns your phone into an external drive, and you can use Recuva (see above) to restore it.

Unfortunately, Android disabled USB Mass storage with version 4.4.2. There are tools that can scan your phone from your Windows PC and recover files, but they’re not as quick and easy (or as free) as Recuva. Your best bet is probably EASEus’ MobiSaver for Android. Install this program in Windows, connect your phone, and follow the directions. But it will probably require you to root your phone. 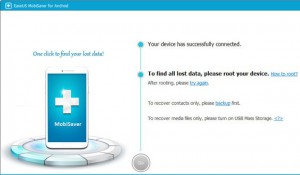 The free demo version will show you which files are recoverable. You’ll need to shell out $40 for the full version, which can recover them. There’s also an iOS version.

If nothing else works

If neither Recuva nor MobiSaver can restore the files, consider contacting a storage recovery service. But you’ll have to ask yourself whether your photos are worth what may be a very high price.

Avoiding this disaster in the future

Take these steps to avoid such disasters in the future: