It’s hard to discuss problems for a company as successful as Facebook. Its latest numbers bear witness to a success on a scale that was inconceivable just a few years ago.

At the same time, the company faces a significant challenge keeping the service relevant to younger users. This severity of this issue was made clear in a recent Piper Jaffray report. 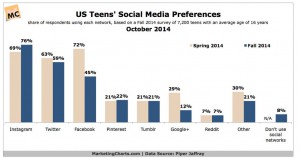 you can see, Facebook’s presence among US teens suffered an extraordinary decline. (The good news is that Instagram, owned by Facebook, was the one social media that showed strong growth during the same period.)

The typical explanation for Facebook’s trouble with teens is that it’s “not cool” since Mom, Dad, and Grandma became avid Facebook posters. And, while this explains a portion of the decline, there are other important contributing factors.

Teens live within a very complex social world. They have multiple sets of friends and social circles; and they work hard to keep these social sets separate.

Facebook’s very nature works against this separation. At its core, Facebook is a “Broadcast” medium. It’s designed to share information across a wide spectrum of friends. And while it’s true that you can create separate groups of friends – that’s a cumbersome and inefficient process.

Teens dislike Facebook because it cuts across their multiple social sets. It broadcasts the same message to everyone. This is what Danah Boyd, in her book on teens and Social Media It’s Complicated describes as “Context Collapse”.

Texting is the lifeblood of the teen years. Its immediacy fits perfectly with the teen’s perception of the world. They experience things in the now – and they want to share their experiences now.

The drive to text is one of the factors that motivated Facebook to pay an outrageous sum for WhatsApp. And, while Facebook has a messaging service, its not built for the 3,000 texts a month the average teen sends.

Teens are constantly trying on new personas. Endlessly re-creating themselves. Facebook is designed to create a personal history. The last thing that a teen wants is proof of what they said/thought/liked/believed last year, or even last week. They’ve moved on – that old identity is dead to them.

The appeal of SnapChat, with its disappearing messages, is in part an expression of this need for disposable identities.

Teens see themselves as living in their own world, separate from the world of adults. Therefore, they want their own channel for communication. Something that is just for them. Just as they have a language full of words and phrases that adults don’t understand or can’t seem to use correctly.

So, as any channel becomes “polluted” by parents, employers, and the world at large; they will move on to find new ways to communicate. They are the ultimate moving target.

First, you have to accept that there is no “solution”. There is no solution because there is no problem. This teen migration is a fact of life to be accepted, not solved.

The reality is that you can’t make teens continue to like something after it has lost its shimmer. And, as every parent knows, the harder you try to make them like it, the more they hate it.