I’ve consumed many business books but these are my favorites from the year. Here are tips and quotes from them to inspire you. 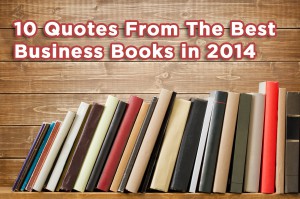 It’s no secret: I’m an avid reader. A more accurate description would be to say I’m a devourer. When I find a business book that resonates with my own thinking and inspires me, I tend to gorge myself with that book and sometimes even finish it in one sitting. Over the past year, I’ve consumed many business books but these are my favorites. Here are tips and quotes from them to inspire you.

1. There are many other factors that help build a company besides intelligence

“In business, intelligence is always a critical element in any employee, because what we do is difficult and complex and the competitors are filled with extremely smart people. However, intelligence is not the only important quality. Being effective in a company also means working hard, being reliable, and being an excellent member of the team.”

Ben Horowitz in The Hard Thing About Hard Things: Building a Business When There Are No Easy Answers

2. Feedback is a tool to foster better work relationships

“Some experiments will inevitably turn out to be a waste of time–that’s why they’re called experiments. But in the aggregate, there are significant life rewards for being willing to test our feedback even when you’re not sure it’s right, or even pretty sure it’s wrong. At the very least, it shows the giver you are open to trying their advice, and there are surely relationship advantages to that.”

Douglas Stone and Sheila Heen in their book Thanks for the Feedback: The Science and Art of Receiving Feedback Well

But here’s the good news: People throughout organizations have plenty of ideas. They’re on the front lines, seeing how things work, how they don’t work, and how they can be made to work better. They hear customers describing problems they would love to see solved, and they notice points of friction and inefficiency inside the company. The role of a corporate leader is to create a culture that channels those ideas, that energy, into solutions that matter. Because that’s the difference between invention and innovation–people can invent all sorts of things, but doing so counts as innovation only if the result is a product or service that a customer is willing to pay for.”

Adam Bryant in his book Quick and Nimble: Lessons From Leading CEOs on How to Create a Culture of Innovation

4. Use the time saved by good productivity into making execution easier

“Whether our goal is to complete a project at work, reach the next step in our career, or plan a birthday party for our spouse, we tend to think of the process of execution as something hard and full of friction, something we need to force to ‘make happen.’ But the Essentialist approach is different. Instead of forcing execution, Essentialists invest the time they have saved into creating a system for removing obstacles and making execution as easy as possible.”

Greg McKeown in his book Essentialism: The Disciplined Pursuit of Less

5. Technology is a tool to help build the future

“If I can impart one piece of advice in reading this book, it’s this: We will not win by shaking our fists in the air at technology. A better solution is to familiarize ourselves with how these tools work; understand how they can be used legitimately in the service of public and consumer empowerment, better living, learning, and loving; and last, come to understand how these tools can be abused.”

Patrick Tucker in his book The Naked Future: What Happens in a World That Anticipates Your Every Move?

6. Don’t choose a successor who is exactly like you

“It’s important to remember that Jobs hand-picked his successor. He trained Tim Cook, indoctrinated him, subjected him to trial by fire, and spent years evaluating his capabilities. Jobs chose Cook knowing full well that he was not a visionary, that he had no history as an innovator, that he was best known for his devotion to spreadsheets. Jobs didn’t choose Jonathan Ive to lead Apple. He chose the Attila the Hun of Inventory. The question is, why? Did he think that a numbers man was best for the storms gathering at the horizon? Or did he want to make sure that his vision would not be replaced by someone else’s?”

“Technically, a curmudgeon is an ill-tempered old man. I use the term more broadly to describe highly successful people of both genders who are inwardly grumpy about many aspects of contemporary culture, make quick and pitiless judgments about your behavior in the workplace, and don’t hesitate to act on those judgments in deciding who gets promoted and who gets fired.”

Charles Murray in his book The Curmudgeon’s Guide to Getting Ahead: Dos and Don’ts of Right Behavior, Tough Thinking, Clear Writing, and Living a Good Life

8. Appeal to the user; don’t force the user to work in your model

“Unfortunately, too many companies build their products betting users will do what they make them do instead of letting them do what they want to do. Companies fail to change user behaviors because they do not make their services enjoyable for its own sake, often asking users to learn new, unfamiliar actions instead of making old routines easier.”

“In business, a disproportionate amount of importance is placed on the ability to network. If you don’t thrive on going out and meeting a million people, you might end up feeling that you have less of a chance of getting ahead in your career. Also, introverts might hang back in meetings and thus not be perceived as ‘leadership material,’ even though introverted people frequently make more empathetic managers.”

Sophia Amoruso in her book #GIRLBOSS

10. Take risks in your thinking and business strategy

“Resources are not infinite: You cannot solve tomorrow’s problem if you aren’t willing to abandon today’s dud.”

Steven D. Levitt and Stephen J. Dubner in their book Think Like a Freak: The Authors of Freakonomics Offer to Retrain Your Brain