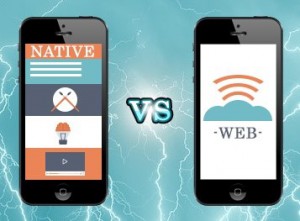 Once you’ve decided to develop a custom application for your business, you’ll have to determine whether it would be best for you to invest in a native app or a web app.  As the word native suggests, such an app would run (natively) on a particular operating system, with its functionality coded specifically for that platform. A web app, however, would exist in the cloud, so to speak, and would run online as a web-based application.

There are pros and cons to each approach, and what works best for your business will depend on the extent to which addressing your needs will require integrating software applications across multiple device platforms. To help you get a better picture of what you might need, let’s examine what’s involved in developing an integrated native app or an online web app and address how each might impact your business.

If you need to integrate software applications or systems across multiple platforms, you will probably find a web-based app to be most cost-effective and functional.

Here is a real-world example to help illustrate why that could be the case in mobile application development. Let’s say a retailer wants to develop a mobile application to help employees in the field scan and track the status of merchandise using smartphones. In this scenario, the app on the mobile device would likely communicate with a central database, while the app’s code itself would reside online as a web app. The web-based app would also make it easier to run the program on a broad range of devices, including computers that run Windows and/or OSX.  Now, if this business wanted the application to be used on both iOS and Android phones as a native program instead of from the cloud, they would have to consider the impact on the development cost.

Typically, to have native apps running on multiple platforms, developers will have to write separate code for each platform, which can become costly and time-consuming. Though programmers may be able to simplify native app development using cross-platform tools for some projects, this isn’t always possible, and it has limitations. It may simply not be cost-effective to try to incorporate the same complex functionality across every platform, and you may run into challenges using device-specific hardware.

You’ll have to confer with your software development partner to determine whether building a cross-platform native app is practical or even feasible for your business goals. And you’ll often find that developing a web app is the better option when it will be used on many different types of devices.

Web apps, because of how they function, are more intuitively suited to multi-platform usage. Since web apps tend to run within common client software, such as a web browser, most devices with web browser access can run the application.

As the use of smartphones, tablets, and computers of varying form factors has increased, developers have become more adept at building web apps with “responsive” interfaces that adapt automatically to the size of a user’s screen. Whether on a phone, desktop, or tablet, app users will have an interface that is attractive, intuitive, and familiar.

When developed properly, there should be little difference between using the web app on an Android or iOS device, or even on a laptop running Windows. Furthermore, since your development team will be working on a single, consistent codebase, without having to worry about translating functionality across multiple platforms, the process of building, maintaining, or updating the app should be much faster and more budget-friendly.

Of course, there are some tradeoffs to consider. In some cases, it may be difficult to take advantage of specific hardware features through a web app. That’s particularly true in situations without Internet access or where there’s a spotty connection, since web apps are best suited for circumstances where users can expect to have reliable access to a network.

Making the Decision between Web and Native Apps

In some cases, the particulars of your project will make the decision for you. For apps that will need to run regularly without internet access, a native application is likely the best choice – even if it requires complex multi-platform development. If your users will have steady network access, you’re working with tight time or cost constraints and native cross-platform development tools aren’t available for your project, a web app would probably be your best option.

In many cases, however, the choice won’t be so clear-cut, and other considerations may guide your decision. Native apps, for example, can be made available through the Apple App Store or Google Play. While these apps may be easy to download, install, and use, the app store rules may also restrict your content and force you to update the app to conform with new operating system updates. A web app, on the other hand, can be hosted on your own server and updated on your own schedule – and remain entirely under your control.

As you think about integrating software applications, talk with your software development partner and VietNam software outsourcing services about your needs, the complexity of your project, and the types of devices you want to use with your app. With careful consideration of the distinctive implications (as well as the limitations) of both native and web apps, you’ll find the right solution for your business.