This is one of the world’s greatest computer game developers that made groundbreaking titles like “Half-Life,” “Portal,” and “Left 4 Dead.”

As a private company, this company doesn’t disclose financials. But in a 2011 Fortune profile, founder Gabe Newell said that the company was “tremendously profitable,” with estimated revenues in the hundreds of millions of dollars.

In fact, he claimed that it is more profitable per employee than Apple or Google.

The key, of course, is the employees themselves.

The increasingly famous its handbook for new employees says that since the company has a non-hierarchical or “flat” structure, “adding a great person can create value across the whole company,” while “missing out on hiring that great person is likely the most expensive kind of mistake we can make.” 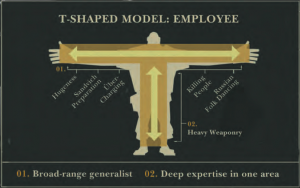 The handbook defines T-shaped employees as:

People who are both generalists (highly skilled at a broad set of valuable things — the top of the T) and also experts (among the best in their field within a narrow discipline — the vertical leg of the T). This recipe is important for success.

If either side of the T is missing, then a candidate won’t be successful at this company.

“An expert who is too narrow has difficulty collaborating,” the handbook states, while “a generalist who doesn’t go deep enough in a single area ends up on the margins, not really contributing as an individual.”

As we’ve talked about before, having that combination of a special skillset and broad interests is a surefire way to become super impressive. Many Viet Nam software outsourcing and Vietnam software services are considering this combination in recruitment to get the best cultural fit employees when letting them work onsite overseas.